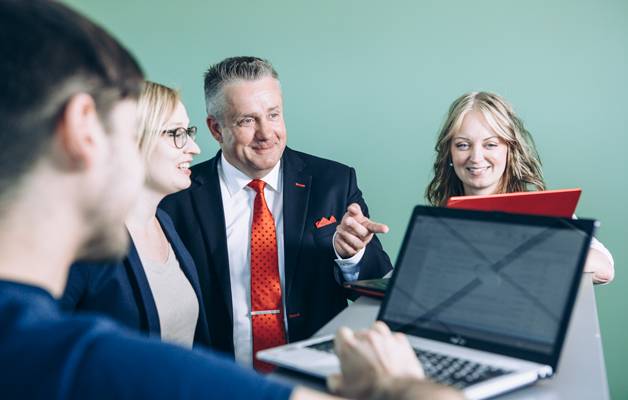 Henry Nieminen (centre) is an old-timer with over 20 years of experience in the information technology sector. Nieminen, who is now managing director of Fujitsu Finland, originally started working as an IT programmer.

The power of example

Managing director Henry Nieminen leads Fujitsu Finland, which employs 2600 people. The line of business is undergoing thorough change. In his role as a leader, Nieminen believes in the power of his own example and in Finnish basic values such as honesty and fairness.

According to an old Finnish saying, a leader leads his troops from the front. Henry Nieminen continues this tradition: his ‘troops’ wrestle in an abstract and rapidly changing field. Nieminen believes that the leader’s own behaviour serves as an example for his followers, but the leader must be sincere.

– The key to all leadership is honesty, fairness and acting in accordance to one’s values. In my leadership I always get back to basics, because at the end of the day it’s all about interacting with people, says Nieminen.

Fujitsu Finland is a specialist organization which offers comprehensive and inclusive information and communication technology (ICT) services. Most of the employees are highly educated experts in their own field. Nieminen believes that in such an environment, a leader’s authority and position are not self-evident. A leader must win his spurs by keeping promises and treating people equally.

– A manager cannot hide behind leadership theories and haste. People can see whether the manager is whole-heartedly in the game or not, and whether he stands firmly behind his entire team.

A strong team, team spirit, the desire to win – these sports metaphors come up also when Nieminen speaks of his leisure-time hobby, which is enduro or cross-country motorcycle racing. Then Nieminen digs deeper into sports, and ends up talking about the gold nugget of coaching, Curt Lindström, who coached the Finnish hockey team when they won the 1995 World Hockey Championship. Before the final match against Sweden, Lindström wrote his team an emotional letter that spurred the players to give their all to win a historical victory.

– In that letter, the words came from Lindström’s heart. A leader must be able to give something very personal to his organization when he expects his subordinates to want to do something that no one has ever done before, says Nieminen. – The challenge to learn and develop is great in a state of radical change. It is therefore important to encourage and motivate employees to learn new things and develop themselves, Nieminen says.

Managing a business in a stage of transition means leading people, as well as making the right decisions, and selecting a direction for the future. This is difficult, as no one can predict the future a hundred percent. Success requires joint efforts and commitment to goals from the whole organization.

– And here we come back to basics: people must work as a team, the team spirit has to be good, and people must have a common will and goal. When the working feels good and is inspiring, it’s possible to find the means to go ahead.

Nieminen says that his task is to make sure that everyone at Fujitsu fully understands and sees clearly the impact of his or her own efforts on achieving the goals of the enterprise. Common goals and personal goals must be made compatible.

In order to benefit from digitalization, Fujitsu’s client enterprises have to know how to change their business concept or create an entirely new business concept which exploits the possibilities offered by digitalization. Fujitsu, in turn, must thoroughly understand the client’s business. Nieminen knows that innovations are created by combining these two aspects.

– In managing innovativeness, there should be a balance between freedom and specifically structured methods of operating and working, Nieminen says.

– Freedom and open-mindedness make room for new ideas, but at the same time, in a big enterprise there must be operating models that are commonly agreed on. Every day Tom Nuorivaara, Henry Nieminen, Jutta Tiilikainen and Jutta Smolander face the challenges of rapidly advancing digitalization in their work. Fujitsu’s employees sometimes bring along their dogs, like Ellen, to the office.

Knowledge management is a new phenomenon in work life. Knowledge managers are familiar with economic theories and tools, as well as the possibilities of information technology (IT) in supporting cooperation between people, in managing knowledge and in developing enterprises. The importance of sharing information grows constantly, and it affects the development of know-how at workplaces.

Henry Nieminen believes that IT gives new tools to managers. Ten years ago IT was used mainly to automate work phases, now IT is applied for example in strategic planning and change processes. According to Nieminen, very few enterprises can succeed if they don’t have IT in their management tool kit.

– A manager who uses IT for communication should not be faceless, however, because personality and presence are important. I myself prefer to send video messages instead of e-mails.

The managing director says that, in addition to communication by video, he is in contact monthly with his employees in joint meetings. In the meetings, Nieminen tells about the present situation in the enterprise, about the progress of development programmes and other current matters, and the employees can ask questions.

A nervous and tired manager always sends out negative signals.

The management team of Fujitsu Finland is quite big – it consists of 12 members. Now in early autumn the whole group is working together in an open office, because it promotes openness, dialogue and team work. According to Nieminen, the management team disseminates his leadership philosophy throughout the whole organization.

Nieminen talks much about his team, but eventually the conversation turns to the personalities of the managers. Managers, like employees, are individuals whose well-being must be taken care of. And this is, above all, the task of the managers themselves.

– A person must get enough sleep and try to make sure that things at home are in order, and keep himself in good shape, Nieminen lists.

People at the workplace can see if the manager is stressed. A nervous and tired manager always sends out signals about something – especially if the employees can’t see an obvious reason for the stress. Stress also affects decision-making, which is inevitably a big part of a manager’s work.

– Good decisions are made only when the brain functions as it should, Henry Nieminen says.