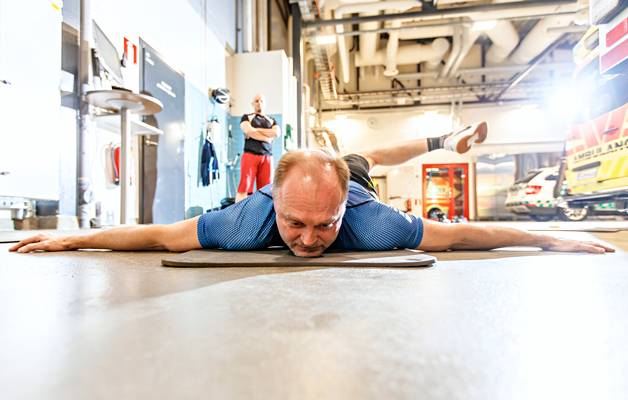 Fire fighter Reiska Taipale in the equipment hall of the fire station, doing stretching exercises that improve the mobility of the pelvis. Antti Juselius looks on.

Renewing the wage system and the work time system reduced expenses at the Rescue Department of Etelä-Karjala (Southern Karelia). The saved money was invested in the employees’ well-being at work and in training. In this way the work ability of the fire fighters can be maintained as long as possible.

Three fire fighters are exercising in the equipment hall of the fire station. They are flexing and rotating their shoulders and hips, and taking long ‘spiderman’ steps with deep squats, and doing balancing exercises.

Antti Juselius is concentrating on the ‘spiderman’ steps. He takes a long stooping step, twists his back, takes support from the ground with his hand, and reaches up toward the ceiling with his other hand.

– My joints and limbs are getting more supple, he says.

The firemen exercising at the Lavola fire station at Lappeenranta are a concrete example of the reformation carried out in the Rescue Department of Etelä-Karjala. Each of the four fire stations of the department have jointly agreed to adopt a comprehensive wage system and to centralize tasks. This has cut down superfluous expenses.

The savings accumulated from reorganizing the systems have been invested in supporting the employees’ work ability and coping at work. For instance, an occupational physiotherapist has been hired. The firemen now start each work shift with the exercise protocol that he has drawn up. In 2016 two new fire stations were built in addition to two existing around-the-clock stations, so the need arose to standardize the operations of the fire stations.

– The work time planning and ways of working differed greatly between the four stations. Each supervisor was responsible for his own work shift. This meant that a total of 16 persons, plus their substitutes, would have had to plan work times, says fire chief Sampsa Lintunen.

– First of all, we had to get an information system that would help us handle the work time planning of the four fire stations. A program was tailored for our special needs, but it can also be used by the first responders of the social and health service of Etelä-Karjala, as well as by the rescue department of Pohjois-Savo (Northern Savo).

A resource office, supervised by Sampsa Lintunen, was set up at the new fire station of Lavola. The personnel administration was centralized there to carry out the work time planning of all four fire stations. Four shift supervisors and their substitutes work in the resource office.

At the same time, a comprehensive wage system was set up and taken into use in May 2016. In addition to their normal basic wages, the men now get a fixed compensation which is about 41% of their basic wages. It was also agreed that 24-hour work shifts can be broken up into shorter periods. The men exercise for 20 minutes at the beginning of each shift. First they work out in the gym, after which they do stretching exercises.

Different-coloured lines speed along the screen of the computer in the resource office. It is impossible for an outsider to understand the work time planning program, but shift supervisor Olli Tarhonen is well on board of what’s going on – who is on shift now, who is on vacation, who is sick, who is replacing someone, who is doing ‘short periods’, and so on.

– Earlier, for instance, one shift supervisor might be doing something at Imatra, and another one was doing something else at Lappeenranta. Both meant well, but it was easy to get into mix-ups, says Tarhonen.

Improving information flow was an important part of carrying out the change successfully. The planning of the shift supervisors is made easier by the work shift account established in WhatsApp.

– If someone has to leave work on a sudden sick leave, I can send a message to the group telling that a volunteer is needed for tomorrow.

Another improvement in information flow is a TV screen, which every Monday shows the work schedule and info of each fire station in real time. Every employee has a link to the recording, so that all work shifts know what’s going on. Our assumption was that efficient work time planning, no more overtime work, and centralized personnel administration would reduce expenses, even though at the same time we had recruited more fire fighters. When savings started to accumulate, they were invested in various activities to improve the well-being of the men.

– Investing in the employees’ well-being is especially important in the rescue sector. One challenge is that the retirement age of fire fighters has been raised continually, although good physical condition is absolutely necessary for doing the heavy work, says Sampsa Lintunen.

The retirement age of fire fighters is being raised continually. That presents a challenge, because their work is heavy and they need to be in good physical condition.

In addition to hiring a physiotherapist, a fitness bonus system was created for the personnel. If a fireman is in sufficiently good physical condition for his age, he gets a bonus of 200 euros in his December salary.

– We have invested especially in training that provides additional competence. Simultaneously, we have started to renew task-based pay criteria. The goal is to offer several career path options for fire fighters, so that they can engage in alternative duties when their physical condition diminishes. For example, tasks related to safety training and fire prevention and education can be part of a fire fighter’s work.

Lintunen is certain that the professional skills of fire fighters have improved.

– At least we have put more emphasis on complementary training, specialization, and basic training. Whether the investments in training and well-being have actually improved the well-being of the personnel, is still to be seen. Reliable information will be obtained later when we can compare sick leave data. Antti Juselius, 41, worked as a truck driver before becoming a fire fighter seven years ago.

The fire fighters are pleased

Fire fighters Antti Juselius, 41, Reiska Taipale, 47, and Timo Tahvanainen, 37, are pleased with the reformations. The employees’ suggestions concerning changes were listened to, and for instance ideas related to communication came from the employees.

– The comprehensive work time system guarantees a regular income and facilitates shift changes, because all days are equal money-wise. The WhatsApp group is handy. The overall system has also become more rational: the firemen no longer come to work even when sick on weekends, just in the hope of getting better pay, Juselius says.

The advice of the physiotherapist, regular physical exercises, and the fitness bonus motivate the men to take good care of their physical condition.

– Also earlier we used to train in the fire station’s gym, but in addition to that we now do exercises to improve our mobility, suppleness, and balance, Juselius points out.

After the reformation, Tahvanainen has been abroad and participated in two training courses on road traffic rescue operations. Juselius, on the other hand, has taken part in training for oil spill control in Oulu.

– Creating new career paths sounds good too. We will gladly retire from our own work, rather than leave prematurely on work disability pension, says Tahvanainen.

A prize for the rescue department

The Working Life Prize of Sitra, the Work Environment Fund, and the Ministry of Social Affairs and Health was awarded in May 2017 to the Rescue Department of Etelä-Karjala (Southern Karelia) for developing and renovating its operations. The renovations involve 85 employees who take part in rescue operations, but can later be extended to cover the rest of the personnel as well.