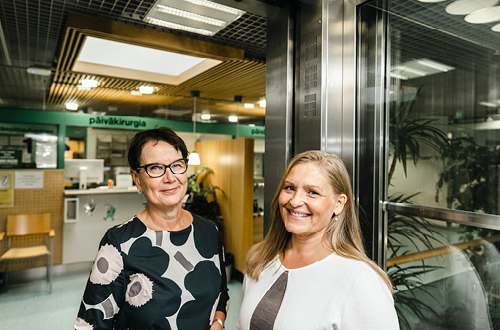 Permission to speak and resolve together

”The project promoting the management of workplace violence started in Päijät-Sote when every second employee reported in the occupational well-being survey that they had encountered violence or a threat of violence at work. The problem had been noticed before, but it had been ignored, and in the unit attending patients with memory disorders, for example, workplace violence had already begun to be seen as a norm.”

There was a perceived threat of physical violence was greater as the employees had to endure the possibility of being a victim of violence in the course of their work. Threats of workplace violence can occur, for example, in autism units, social work with intoxicant abusers or family work.

In crisis management, employees were able to share their experiences and feelings.

In one unit, a resident got annoyed in his own room, and workers went to calm him down. Another resident was wound up about the situation and came to hit the workers with an iron pipe. Workers received hits and bruises. The police were also called to the scene, but the resident remained in the unit. Just reading the incident report could have raised fears in the employees in the next shift. 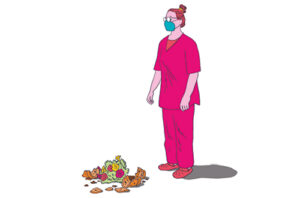 The situation was resolved according to the new approach: In crisis management, employees were able to share their experiences and feelings. They were encouraged to seek professional help if the situation still preyed on their minds.

Next, operating models were considered: what dangerous goods does the resident have in their possession, can the other residents be close to an abusive resident, how many workers are needed to work with them, what signs of aggressive behaviour can be detected in advance, and so on.

A resident-specific safety plan was then drawn up: the threat of violence could be managed by creating ways to calm the situation and restore a sense of security in the work community.

We have learned to make the ways to manage violence and its threat more visible.

Workplace violence will probably never be completely eliminated, but it should not be tolerated in silence. Our goal is to create a way of working that makes everyone feel safe talking about their fears or the challenges of their work, and the team together creates solutions and ways of working. Negative emotions caused by situations at work must be also addressed at work so that no one has to deal with them at home.

Employees have had their own means of coping in the past, but it has not been possible to systematically resolve situations of violence at work among the work community. Too many have been left alone to cope with that kinds of situations.

We have learned to make the ways to manage violence and its threat more visible. Employees of the service unit have reported that there have been many incidents of violence in the past, but now, thanks to coaching, they have diminished when threatening situations have been anticipated, and the resulting thoughts and feelings have been shared and dealt with within the unit.

Employees have had the chance to talk about the hurtful and stressful situations in joint coaching, and the supervisor has been involved. ”Finally someone hears us,” many have said.

Young workers, in particular, work under mental and physical pressure.

Physical violence or the threat is often easier to identify than mental violence, which can include insulting or devaluation. One form of mental violence can be a situation where a family member criticises caretakers, saying, for example, that ”you are responsible for this decision”. Many discussions on social media also cross the line of mental workplace violence.

Young workers, in particular, work under mental and physical pressure. The emotional load can be quite considerable, and it has not been talked about enough. For example, a young worker in a life-threatening situation was once told that ”you will get it right in the next 20 years”. That one sentence invalidated the feelings and fears. Instead, the young employee should be allowed to talk about their feelings and think about common ways of working.

Changing the attitudes and operating culture of the entire organisation requires a lot of work.

Work to manage workplace violence extends to the management level. Safety management is not a separate issue, but part of management. It requires concrete decisions, such as reducing the number of customers in the housing unit or acquiring new alarm devices.

Supervisors also need much more training and support, as they are under enormous pressure from both senior management and employees. Supervisors should be able to go through the challenges of their own work in regular meetings with the occupational health nurse, the health and safety officer, and their own supervisor.

Our work to prevent workplace violence is continuous. Changing the attitudes and operating culture of the entire organisation of nearly 7,000 employees is in full swing but requires a lot of work.

The coronavirus pandemic has prolonged and increased a wide range of challenges in our work. But, on the other hand, the same solutions apply as in the prevention of workplace violence: every day the supervisor has to ask the employee how they are doing and if they need help in any way. Then we think of solutions together.”

Read next
Good to know