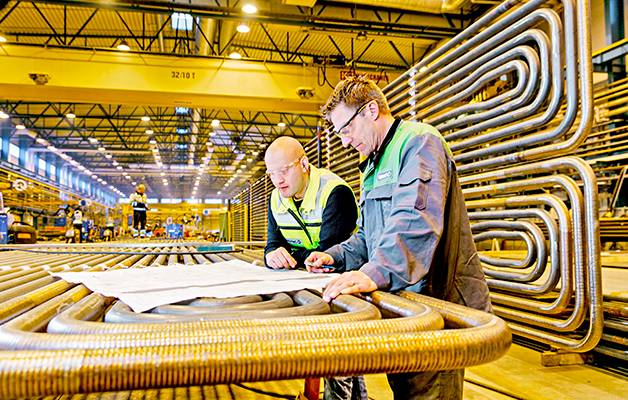 Lean manager Marko Eleinen (left) and Lean coordinator Ari Rossi are discussing how to fix a problem in production. The participation of employees is one of the cornerstones in the Lean method.

The Lean approach promises more with less effort. The idea of continuous improvement prevails at the Valmet factory, where the employees were eager to develop their work. Productivity improved, and so did job satisfaction.

In 2012 the Valmet Technologies factory, located in Lahdesjärvi Tampere, was facing very commonplace problems. The factory manufactures boiler plant components for the pulp and paper industry and the energy industry. The organization of the factory was cumbersome and complicated, and the costs were high. The competitiveness could also have been better.

A big leap ahead was taken at the factory. The previous year Marko Eleinen had come to the factory to develop production. Together with others, he started to apply Lean thinking, which has spread from the automobile industry to other industries, and in recent times also to specialist work and health care. The method focuses on eliminating unproductive activities and on improving work processes continuously.

The first step was to train eight persons to be Lean coordinators. The next year extensive preliminary assessments were carried out at the production plant.

– We began to apply tools in compliance with Lean philosophy, we charted the current situation, and defined goals, says Eleinen, who is now the Lean manager. He is responsible for the holistic development of the factory, coordination of Lean maintenance, as well as acting as the Lean specialist of the global production network. Ari Rossi, a Lean coordinator, is working on TIG welding. The working methods have been improved in many ways with the Lean method.

The way of thinking changed quickly

At first the status of the factory was charted using the Lean Six Sigma method, which is probably the best known part of Lean thinking. The idea is to get rid of all activities which don’t add value, such as transport, waiting and over-production.

– We have had some change resistance, but perhaps the choices for the Lean coordinators were the right ones, because the employees have come on board with an open mind, says Eleinen.

He thinks that change resistance occurs especially in situations where changes are launched without the participation of the employees. However, he has seen that in time the employees have come around when they realize that they benefit from the better working methods.

– In the past few years the employees have participated actively in the development work and brought up needs for change. Their way of thinking has changed significantly in a short time. The goals and development targets are written down on whiteboards and can be seen by everybody. Problems are tackled twice a week at production meetings.

Surveys revealed that especially the quality costs of the factory were very high. The development of productivity was on a low level and product costs were high. Five central development targets were identified with the Lean method: organization structure, management of visual aspects, continuous improvement, production planning, as well as production flow.

Lean thinking has improved organizational capacity, especially in regard to decision-making. The model of visual management has been used to renew leadership and meeting practices. For instance, production goals and development targets are written on whiteboards for everyone to see.

– The management system is one of the cornerstones of Lean thinking, and transparency and the visual aspect are important in leadership, Eleinen sums up.

– Thanks to them, the development doesn’t stop after one improvement.

As regards production, Lean has influenced especially planning, which has become more long-term and methodical. The production chain is now less complex, but Eleinen admits that a sizable development project related to the production flow still lies ahead.

– We try to turn our thinking from separate projects to the overall production line. This changes the entire production chain, he says. The renovation aims to decrease the working capital and production times.

Managers are role models and commit also to developing themselves.

The manager is committed to develop also himself

In just three years the Valmet factory at Tampere has achieved considerable economic savings. The production times are shorter already now, even though the biggest step, making changes to the production flow, is still in progress.

– Hardly any overtime work is done any more, and that is another source of savings, Eleinen explains. He believes that Lean thinking has had a positive impact also on the well-being of the employees, who have participated in the development. Working is now less loading.

The Lean method is now spreading throughout the Valmet Corporation. A Lean change programme aiming to decrease quality costs and shorten delivery times is underway. In addition, training has been organized in Lean thinking, and a programme called Leading through Lean has been launched. The programme has already inspired about a hundred development projects. Applying the method is nevertheless not a pushover, and challenges are in store.

– The support of the management is important. The management must understand the method and know how to demand results, Elenia emphasizes.

He suggests that those interested in Lean thinking should train their employees and carry out comparative analyses in other enterprises. Eleinen also reminds that what works for some doesn’t necessarily work for everybody. He admits that occasionally they have had to take a step or two backwards also at Valmet.

– That’s what it is – a continuous process of improvement.

A characteristic of Lean thinking is that managers are role models and commit also to developing themselves. Eleinen says that continuous development applies also to him.

– I need to improve myself too, says the Lean manager.