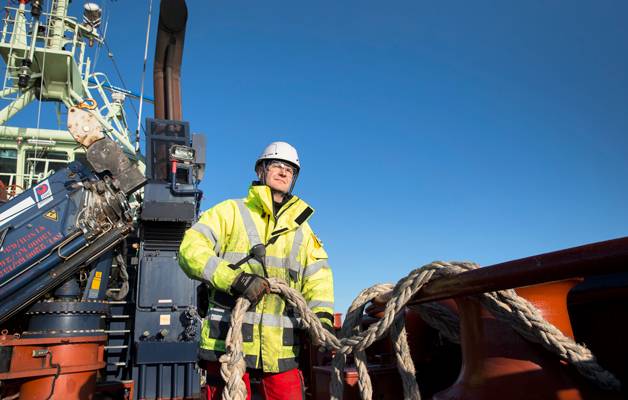 The task of the two tugboats in Porvoo harbour is to escort all ships with a 40,000 ton load capacity all the way from the Gulf of Finland to the harbour. Boatswain Jari Leppämäki works on the tugboat Ahti.

Working on a ship demands patience and the ability to stand pressure. A good team spirit helps to cope in tight-knit work community. Sometimes the time at sea may stretch to over a month without seeing your family and friends.

Nowadays working on a ship isn’t necessarily physically strenuous. Many tasks which previously required manual work, such as the handling of ropes, is now mechanized. But seafaring work does require mental endurance.

– At the end of the work day you can’t just leave the ship and close the door behind you, no matter how sick and tired you might be of your workmate’s face. You can’t walk away from the problems of the work community. Difficulties in your private life can also cause stress, and then in the midst of everything, you have to leave home and be cooped up in close quarters with you workmates without being able to sort out your own problems, describes boatswain Jari Leppämäki.

Leppämäki is the special occupational safety delegate at his workplace, OSM Ship Management. He works on Ahti tugboat, which helps bigger ships coming in to Neste harbour at Porvoo. The ships have to be towed safely from the route to the dock, or correspondingly, escorted past the Suomenlahti range of rocks back to the open sea. Only a few hundred people in Finland work on harbour tugboats.

– All ships with a load capacity of over 40,000 tons are piloted and escorted all the way from the Gulf of Finland to Porvoo harbour, even if they are only partly loaded. That is a safety measure adopted by Neste Corp. aiming to increase the safety of the operations, because the passages in the Gulf of Finland are very rocky. The escort activity of tugboats was started at the beginning of 2000, says Leppämäki. Every worker has his own cabin. The sauna, washroom, kitchen and messroom or day room, furnished with sofas, a dining table, as well as a big TV screen, are in common use.

There are possibilities for the men to engage in various activities on the boat also outside their work shifts.

The tonnage capacity of the oil tanker harbour at Porvoo is the greatest in Finland: 25 million tons in 2016. About 1100–1400 tankers visit the harbour yearly.

– These ships are not liners. They don’t arrive on a set day or time, but according to how the cargoes get unloaded or loaded. The escort tugboat goes to meet the tanker at whatever time of day or night needed.

Ahti is 33 metres long and 13 metres wide. The agile little boat doesn’t need a big crew. One work shift can be manoeuvred by a team of three experts: the captain, the engine master and the boatswain.

There are two tugboats in the Porvoo harbour, both of which have a double crew: one on duty and the other off duty, in other words, six men per tugboat. The make-up of the crews varies somewhat, so the men don’t have to spend their working hours and free time with the same people continuously.

– The working hours on a tugboat are irregular. The work is done in three-week periods – three weeks on the boat and three weeks off. Of course the shift includes resting times, but during it the crew don’t leave the boat, except maybe for a jog or to the gym in the harbour. We are always available.

Nowadays there are possibilities for the men to engage in various activities on the boat also outside their work shifts. Communication technology has developed immensely during the past twenty years, so the men can contact their family members from the boat and chat with them daily. They can also watch their favourite programmes via satellite TV. There are also library services, computer games and other pastimes. The law requires strict qualification requirements for seafarers. Nowadays all have YT certification from Trafi for the safe manning of ships, in other words, the right to work on deck as well as in the engine room. The boat’s captain Jani Huumonen at the steering wheel.

The cabin is your private space. There is a rule of thumb on the boats: you don’t go into another person’s cabin.

The significance of social skills is emphasized in a small work community. It is essential to get along with different kinds of people.

Leppämäki praises the team spirit of his own work community. He says that the relatively low turnover of the personnel in the Tugboat Unit is a reflection of job satisfaction. The Unit also gets top scores in the company’s well-being at work surveys.

He feels that job satisfaction does not depend solely on the supervisor’s know-how and leadership. Team work plays a big role.

– The supervisor makes decisions concerning work, but the team members spend a lot of time together even during free time. Then we are not supervisors and subordinates, just equal human beings. Our opinions may differ, but we don’t quarrel. There are no taboos, we can talk about anything at all. I know that on some boats people try to avoid disputes by not discussing politics, the upbringing of children, or sexual issues, Leppämäki says.

But you don’t always want to be in the group, even if it’s a good one. Your own cabin is the place where you can retire. All the necessaries are there, also a TV, if you don’t want to watch it with the others in the common room.

The cabin is your private space. There is a rule of thumb on the boats: you don’t go into another person’s cabin.

Getting to the core of problems

In his role as special occupational safety delegate, Leppämäki has seen situations on boats where members of a work community have gotten into a bad conflict.

He knows that in such cases it’s crucial to tackle the matter immediately before it gets worse. In some way or other, the parties of the conflict must be made to sit down to talk at the same table. The inflamed situation is awkward also for those who are not directly involved in the conflict.

– Everyone is obligated to intervene if they see that someone is being treated inappropriately, regardless of whether the person is a subordinate or a supervisor. Also subordinates can sometimes harass their supervisor, for example by resisting processes for which the supervisor is responsible.

The truth is that not all people get along with each other. They don’t have to like each other, but they have to be able to work with others and maintain decent working relations.

– Perhaps the friction caused by differences in personalities remains hidden longer. At some point, however, it may turn into lack of professional esteem, and manifest itself as inappropriate behaviour. The antipathy is expressed in the form of belittling the person. Situations like that are really hard to unravel, especially if it’s one person’s word against another’s, says Leppämäki.

“The work on the boats is usually done together, but even one member can manage alone if necessary.”

The law requires strict qualifications for seafarers. Often the boatswain of the ship acts as the supervisor of the deck crew, but Leppämäki is also qualified as a machinist, so in practice he can work in the engine room as well as on deck.

Leppämäki has worked for over 15 years in the harbours of Neste Corp. – the past eight years in Porvoo. It takes him 40 minutes to drive to work from his home in Helsinki. But that’s not so bad, it’s just one week out of three.

– The work on the boats is usually done together, but even one member can manage alone if necessary. The tasks are versatile, but the work does have its challenges. Keeping watch on the navigating bridge is three-shift work in periods of four hours each, and it can come your way at any time of day or night. The constant need to be on the alert may be mentally challenging to some, says Leppämäki.

Leppämäki has worked nearly all his life on the seas nearby. He says it was a pure coincidence. It was convenient to start regular work in the same place where he had been a trainee during his time at the naval trade school. But he has sailed farther too, in the Greenland Sea, among other places.

– One of my seafaring friends once said that I have a shorter distance to the shore than many have to the bottom of the sea. And that’s true, Leppämäki laughs.