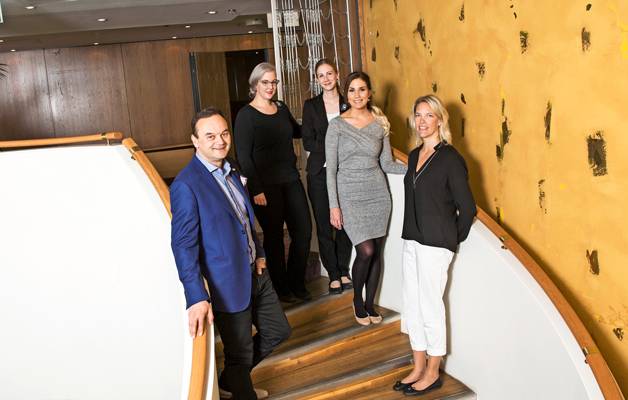 Scandic is “our workplace”

The organization culture of Scandic is based on cooperation between the employees, supervisors and the management.

The lobby of hotel Scandic Marski is quiet during lunch time. The buzz of conversation and clinking of cutlery is heard from the restaurant next door which is full of customers. A while ago, during rush hour, shift supervisors Nea Soini and Jessica Fellman were busy behind the reception desk. Now they are in the second floor lobby of the restaurant waiting with shift supervisor Ida Mäkelä for the ‘Inspiring Nordic’ workshop to begin. The entire personnel participate in the workshop which deals with the enterprise’s values and their impact on everyday work.

Aki Käyhkö, managing director of Scandic hotels in Finland enters the lobby with a happy face. Personnel manager Riikka Mattila joins him and says that at Scandic everybody knows each other on a friendly first name basis, and titles don’t define working relationships.

– We don’t have “managers and workers”, we’re all just people, workmates, Käyhkö continues.

The personnel feel that Scandic is a good place to work. It was ranked first in the global Great Place to Work investigation in the series of Finland’s large enterprises.

– Our colleagues in different enterprises have asked us what we have done to be chosen as the best workplace in Finland. My answer is that we haven’t invented anything that you yourself don’t know. It’s simply a question of implementing generally known good ideas, Mattila says.

According to the personnel manager, success comes from the combined efforts of the entire personnel.

– That means cooperating every day – not just in rarely held legally stipulated meetings of the official cooperation committee. The ‘Inspiring Nordic’ workshop starts with the participants introducing themselves. Each person also mentions one of the enterprise’s values which he or she would like to embrace and develop further in him/herself.

About five years ago, the people at Scandic Finland decided to start to develop their work culture in a less hierarchical direction.

– We reduced unnecessary rules and allowed our employees to make independent decisions. Our aim has been to make the work more meaningful and fulfilling, and to increase commitment and participation, says Käyhkö.

– We also discuss our values constantly. We challenge our people to think how they would solve problematic situations on the basis of our values instead of rules. At the same time we have focussed on coaching supervisors and on analysing leadership style, Mattila continues.

According to Käyhkö, making changes in the values of the organization has been tough work.

– We decided to go ahead with the renovations, but it hasn’t always been easy. It has required a lot of self-reflection and rigour especially from the supervisors in trying to set an example with their own behaviour for the teams.

– At the same time we have to stay on course and make sure we are doing the right things, and see whether the personnel is committed to the new way of thinking, Mattila adds.

Käyhkö believes that the change will be achieved when the new values are repeated over and over again.

– It took us five years for us to develop our own work and the enterprise before it was rooted into the culture. A more impatient person would have drawn up a new strategy and new goals, even before the old ones have been realized.

– For the majority of the personnel this is now our firm – not just an employer.

According to Käyhkö, even all the hard indicators support the work we have done.

– For instance, the profit of the enterprise and the feedback from the customers have improved significantly during this time. After lunch hour the dining room of Scandic Marski quiets down.

Ideas get support from the supervisors

Jessica Fellman, shift manager in the hotel reception, confirms that the opportunity to participate in developing one’s own workplace applies to her work community and the whole enterprise.

– Together we develop our work and discuss what might be done even better.

Nea Soini, who is also a shift manager, goes on to say that carrying out ideas that improve the work is easy. No official permission is needed.

– The supervisors are part of the team and are they are here to support us, Soini says.

The hotel manager of Scandic Marski, Jouko Puranen is carrying a big box of sparkling wine, as he joins the group waiting in the lobby. He says that one of Scandic’s mottoes is “Be bold”.

– It means that the employees – in other words team members, as we call them – are encouraged to boldly propose improvements. The suggestions are recorded and persons are named to carry them out with the support of the supervisors.

For example, a suggestion proposed by Ida Mäkelä, shift supervisor of Marski Restaurant, was implemented recently.

– We hold a weekly meeting with the restaurant’s shift supervisors and other supervisors where we go over the events of the past week and all current issues. It had occurred to me that the interaction between the departments would be better if also the shift supervisor from the reception, who is on duty, would join in. Now this is routine practice. We get information right away which affects us both in the restaurant and in the reception, Mäkelä explains.

Getting everyone together is a challenge in an enterprise where the people’s working hours are different. That is why the social media is used as a tool to improve cooperation at Scandic. Hotel Manager Jouko Puranen, together with Meri Palletvuori, Manager of Front Office & F&B, is carrying a box of sparkling wine. Drinks will be served to celebrate the birthdays of some participants.

The threshold for discussion was lowered

A little over 900 people work in 25 Scandic Finland hotels and three Hilton Hotels all over Finland, for example as waiters/waitresses, cooks and reception personnel. The hotel sector has recently been affected by an economic slump.

– We are probably the only enterprise in this sector that hasn’t had to resort to mass lay-offs in Finland, says Käyhkö.

At Scandic, matters related to the joint-cooperation legislation are handled by the Scandic Council which meets three times a year, and more often if needed.

– In the Council meetings we discuss openly the strategy of the enterprise, past events and developments, development projects and challenges, says personnel manager Mattila.

The employees are able to exert their influence directly in the development meetings, the weekly meetings and the workshops. In addition, the shift supervisors of Scandic Marski take turns in participating in the meetings of the executive group, where they can express their views.

– The general idea is to keep the threshold between the supervisors and team members low. For instance, I’m in the habit of going every day at breakfast time to collect dirty dishes and chat with the team members, says Puranen, hotel manager of Scandic Marski.

Getting everyone together is a challenge in an enterprise where the people’s working hours are different. That is why the social media is used as a tool to promote cooperation at Scandic.

– We started a Facebook group for the entire personnel, and it’s very popular now. It has increased open discussion and helped us to take pride in our work and to maintain a strong mutual culture, says Riikka Mattila.