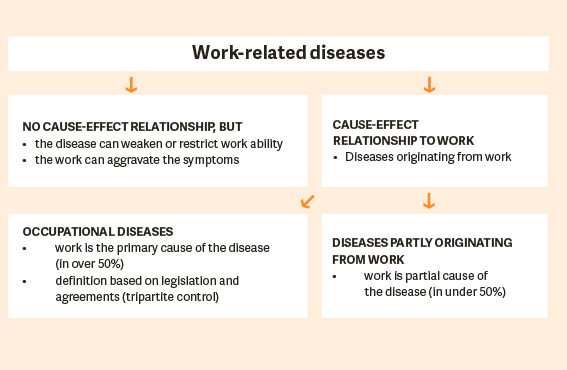 Occupational diseases are caused by work

The difference between an occupational disease and a work-related disease is quite clear. But it is still not always easy to recognize or diagnose a disease that originates from the work.

– In the case of an individual employee, it is not always possible to distinguish between an occupational disease and a work-related disease. The central question is not to find out what is unique to the individual, what is the role of heredity or the environment, but rather, how to support the person’s work ability, says director Eva Helaskoski from the Finnish Institute of Occupational Health.

Occupational diseases are defined accurately. Certain work tasks and exposure agents clearly cause over 50% of them. The law states that these work tasks involve some physical, chemical or biological agent that causes a particular disease.

The biggest occupational disease groups are skin diseases and hearing defects. The numbers of recorded cases in both of these groups were nearly equal in 2014. Diseases that lower a person’s work ability, or diseases that are aggravated by the work, are defined as work-related, even though they are not directly caused by the work. For example, in the case of musculoskeletal diseases or mental health problems, it may be difficult to determine on the individual level what the actual cause of the problem is. The main cause or a contributing factor may be for instance physically heavy work and ergonomically poor working positions.

If a factor connected to the work causes stress, according to the law it is not an occupational disease. In some instances a sudden acute stress injury at work can be classified as an occupational accident. Situations that in other ways are loading or stressful, may only partly be to blame for mental health problems.

Exact statistics are available only for occupational diseases, and all work-related diseases are not even recorded. Research is carried out based on the register of diseases originating from work, so on occupation level there is indication of which factors increase the risk to fall ill.

– Our plan is to utilize more effectively the data available from for instance the register of diseases originating from work. It is important to focus on prevention and to get information on the probable cause-effect relationships between deficiencies in working conditions and illnesses. How can the employee be supported? Just what problems are work-related, how can factors that weaken work ability be recognized, and how can these factors be eliminated? These are central questions, says Eva Helaskoski. Even though the physical loading of work has decreased, the work of one fourth of employees is still physically loading. This was revealed by the questionnaire survey ‘Work and Health in Finland 2012’ carried out by the Finnish Institute of Occupational Health. On the other hand, the work of another one fourth of employees is sedentary: they are sitting down during most of the work day, and this can also be a health risk. After the year 2000, occupational diseases and suspected occupational diseases classified as being caused by work loading have continued to decline.

Population surveys (Health 2000 and Health 2011) conducted by the National Institute for Health and Welfare have not shown that the mental health of the population has deteriorated during this time.

Insecurity regarding the stability of one’s job had increased, whereas some improvement was seen in other psychological factors related to working conditions. On the basis of the Health 2011 survey, it appears that there is now slightly less mental loading and work burnout than in 2000. Several studies have also shown that leadership is perceived to have improved.

The most recent Kunta10 (Municipality 10) survey has shown that leadership has improved in municipalities, whereas work loading has increased during the past two years, especially in social and health care work and in the teaching sector.

It is difficult to predict the future. Work that is too loading is alarming, for instance in the social and health care sector. The situation can be improved by increasing the number of employees and by organizing the work so that the employees can concentrate on their primary task.

– The insecurity perceived by employees should be given more attention. Good leadership can lessen insecurity and alleviate its negative effects, says Marianna Virtanen.

– The support given to people who have lost their jobs should be sufficient. It should focus at supporting and strengthening their personal resources by providing feasible training and developing their labour market skills. We naturally need more jobs, so that all people, also those with limited work ability, would have better opportunities to participate in work life.

When an employee gets symptoms, the occupational health service of the workplace should be contacted. If the person suspects that the workplace is the source of the symptoms, the employer should tell him or her to contact the occupational health service unit – unless of course the employer is able to rectify the matter right away.

– The occupational health personnel then assess whether the symptoms might be caused by the work or work environment. Also employers have been instructed how to proceed. An employee with symptoms must first tell the employer, who can then tackle the cause of the symptoms, for instance in the case of poor air quality.

Moisture damages should be repaired already before people get symptoms, says researcher Sirkku Lehtimäki, who investigates occupational diseases at the Regional Administrative Agency for Southern Finland.

Also mental health issues are handled by the occupational health services. They carry out the assessment and decide how to proceed.

Lehtimäki has worked in occupational health care since the 1990s. Is the situation any better now?

– It’s hard to say. The developments depend on the individual lines of work, she says.

Read about safety at the Kittilä gold mine.

In order for a work disability pension to be granted, it is irrelevant whether the disease is congenital, work-related, or due to the person’s life style – the causes are not differentiated when the decision is being made.

– The decisive fact is how the disease influences the person’s ability to function. So the decision to grant a pension is based on the degree of lowered functioning that the disease has caused, says chief medical officer Jukka Kivekäs from the Varma Mutual Pension Insurance Company.

The role of the chief medical officer at the Pension Insurance Company is significant when decisions on work disability pensions are made. He takes a stand on the disease and on how it affects the person’s overall ability to work, or to carry out the work in question, and what the requirements of the work are at the moment.

– According to general guideline, the person does not have to be employed only in his own line of work or in his present work environment, if some other type of work may be feasible regardless of the disease.

Here’s an example: A young bus driver who has epilepsy, and whose attacks can be kept under control relatively well by medication, cannot continue to work as a bus driver. However, some other job may be quite suitable for him. In such a situation, he will not be granted a work disability pension.