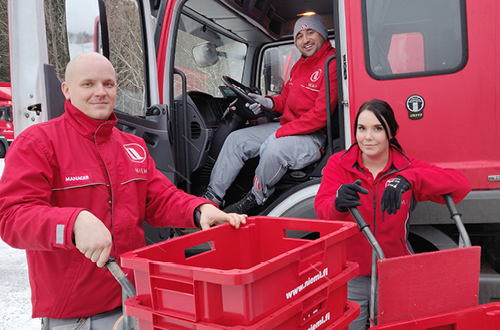 Willem Preller from Vantaa practised his practical skills during an induction session of a removal company.

”I had just graduated as a personal trainer and needed a job, even if it was temporary. A friend told me that being fit and in a good condition was useful in the removal business and that Niemi was a nice place to work, so I decided to apply.

I filled in my details in the vacancies section at Niemi’s website, and the very next day, I received an invitation to an interview.

I got the feeling that he wanted to get to know me better first.

During the interview, I was alone with the recruiter. He asked me all sorts of questions quite extensively and then told me about Niemi’s activities and values. I got the feeling that he wanted to get to know me better first, and then it was his turn to introduce Niemi.

The actual induction lasted two days. First, we toured around the Niemi campus and then we started doing gigs, i.e. practising our work in real-life situations. We learnt how to use a sack barrow and a pallet truck, as well as the correct lifting and carrying techniques.

It was good that the induction was so practical because that’s the best way to learn. Things were explained very clearly, but sometimes it took quite a long time, and you had to stand for long periods of time doing nothing. I would have preferred to do even more during the induction myself.

The employment contract was concluded during the induction.

The two-day induction also included a lecture on Niemi’s values and safety issues, such as not standing behind a parked truck to avoid getting hit by the tailgate – something a beginner might not be able to take into account. Overall, the lecture gave me a good idea of what happens during the actual work.

The employment contract was concluded during the induction. My first job was a home move from Lohja to Nummela. I had another colleague who was also new at the job and an experienced driver with me to advise us. Everything went smoothly. The first two weeks were full of new things, but then things started to feel familiar.

When my colleagues in the move gigs found out that I was still new at the job, I got some funny reactions. There was some banter, but in a good spirit, and inexperience wasn’t a problem. If there were particularly heavy and difficult items to carry, an experienced worker was always there to help.”

You are warmly welcome onboard

A Welshman in remote induction in Vantaa

Handling high-voltage work alongside an expert

Read next
Good to know